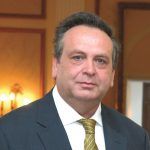 The integration of the people of Europe, the greatdanger of deterioration of our national identity, the looming effort to question our borders and the narrations of the people who left, personal stories that compose the special untold history of Greece, were the reasons I decided to occupy myself with these matters. Living in an small village that was being deserted by immigration, watching the ‘’tears of goodbye’’, I was crying too, for all the neighborhoods that were vacating, for all the people I feared I would never see again, but also for those who by leaving, were taking with them, stories that had thrilled me and that I knew I would never listen to again.

I decided to dedicate my life to that. That is when I created the ‘’Hellenic National Line’’ that would deal with all these matters, without being able to estimate then, the cost, the effort nor the time. I had no money, as I was the son of an eight member agrarian family that at that point, thought of the small coffeehouse my father Basilis owned in the center of the village, as the most important thing in my life, the center of my world.

How the program "Ecumenical Hellenism" occurred

Goals and actions of the "Ecumenical Hellenism" program