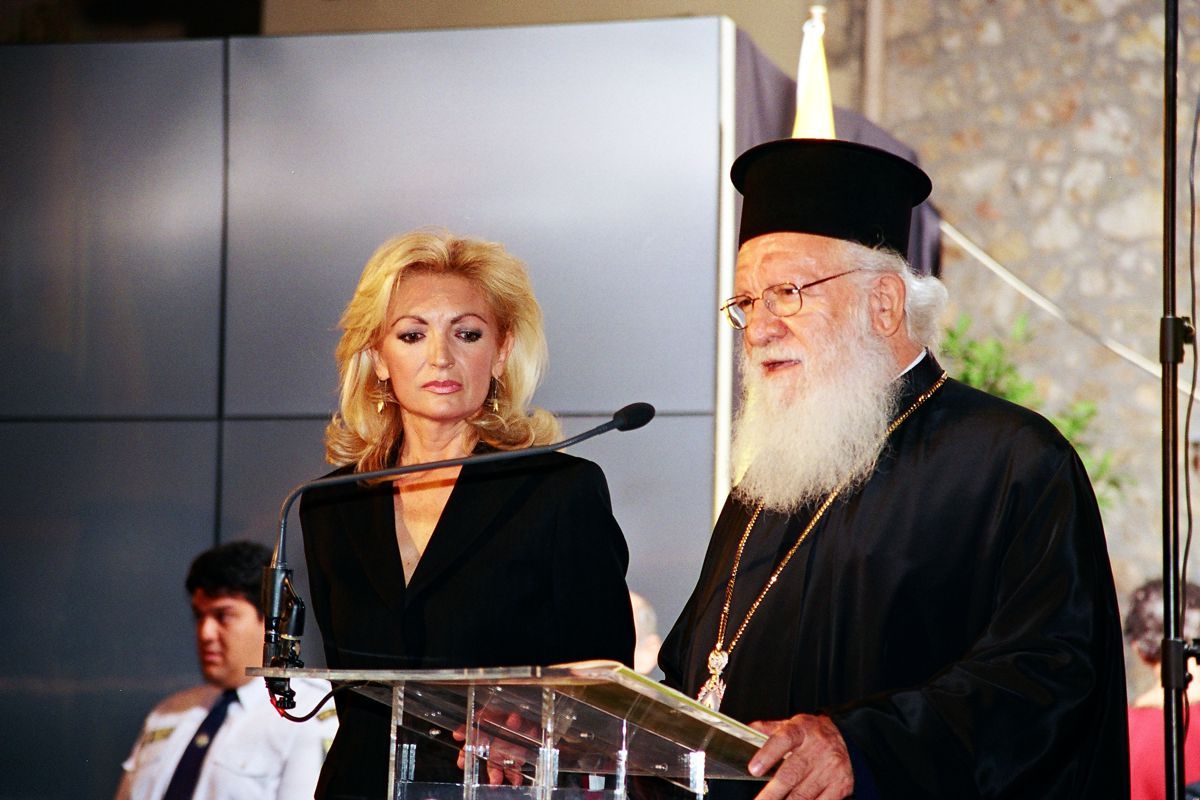 The journalist of ET3 Mara Toparlaki with the Bishop of Velestino, Mr. Damaskinos, representative of the Archbishop of Athens

The Symposium of the Greeks. Ancient Flavors – Athens.

In a specially designed place, based on original references of ancient writings of the 3rd century BC. accompanied  by ancient-theme events under the sounds of flutes and chorus of Lyravlos and Palirrhia ensembles.

The event was presented by journalist Mara Toparlaki.

800 of our friends and members participated.

Dedicated to the forgotten Greeks of Latin America, the “Ecumenical Hellenism” organized on the 27th of September 2003 at 20:30 a reception at the “ANCIENT TASTE” in Kolonos.

From July 10th to July 25th 2003, the “Ecumenical Hellenism” Program fulfilled a mission the expatriated Hellenism of Latin America. The 50-member mission, headed by Mr. Panousopoulos Stavros, President of the Program, Mr. Agelopoulos Athanasios Professor of the Aristotle University of Thessaloniki and Mr. Regouzas Adam, MP of New Democracy in Northern Thessaloniki visited Buenos Aires, Rio de Janeiro and Sao Paolo, where they met with the ambassadors and consuls of the Greek State, and made a series of visits and events in local Greek communities and schools. All events took place under the auspices of the new Metropolitan of Buenos Aires and South America, Tarasius.

The situation is dramatic. The Greeks are abandoned. Schools with only a few hours of Greek lesson due to the government’s inertia to send teachers to teach the Greek language. The churches are closed due to lack of priests. So Greek children do not learn the Greek language, while Orthodox Christians move to the Roman Catholic…”

The event, which was held in a specially designed space with the presence of 800 eminent guests – representatives of the Hellenic Parliament and Local Government, academics and top entrepreneurs – included:

Mr. Stavros Panousopoulos, President of the Program,Mr. Athanasios Agelopoulos, Professor at the Aristotle University of Thessaloniki and the Program contributors, presented their conclusions from their mission to Latin America, while Mr. Kostas Gitonas First Deputy President of the Hellenic Parliament, Mr. George Kanellopoulos General Secretary of the Ministry of Finance, Mr. Ioannis Giannakopoulos MP of PA.SO.K. in Messinia, MP of New Democracy Panagiotis Skandalakis for Laconia, Mr. Petros Mantouvalos MP for Piraeus, and Mr. Vyron Polydoras for Athens, welcomed and expressed their impressions for the progress of the Program and their participation in previous missions.

The dishes offered, were based on authentic references of ancient writings of the 5th “Golden Age of Pericles” and “Dinner-sophists”.

The event was accompanied from “Ancient Events” – Sappho Scripts and special choreographies with ticks and veils – under the sounds of flute and strings of the Liravlos and Palliaria musical ensembles, as well as the presentation of various handmade musical instruments used in ancient times for the production of musical journeys in the 5th century BC.

The event was hosted by the journalist Mara Toparlaki.

PRICEWATERHOUSECOOPERS Sponsors of this distinct cultural event were:

Golden Crowns were received by the following:

Silver Crowns were received by the following:

Honorary plaques were given as follows: