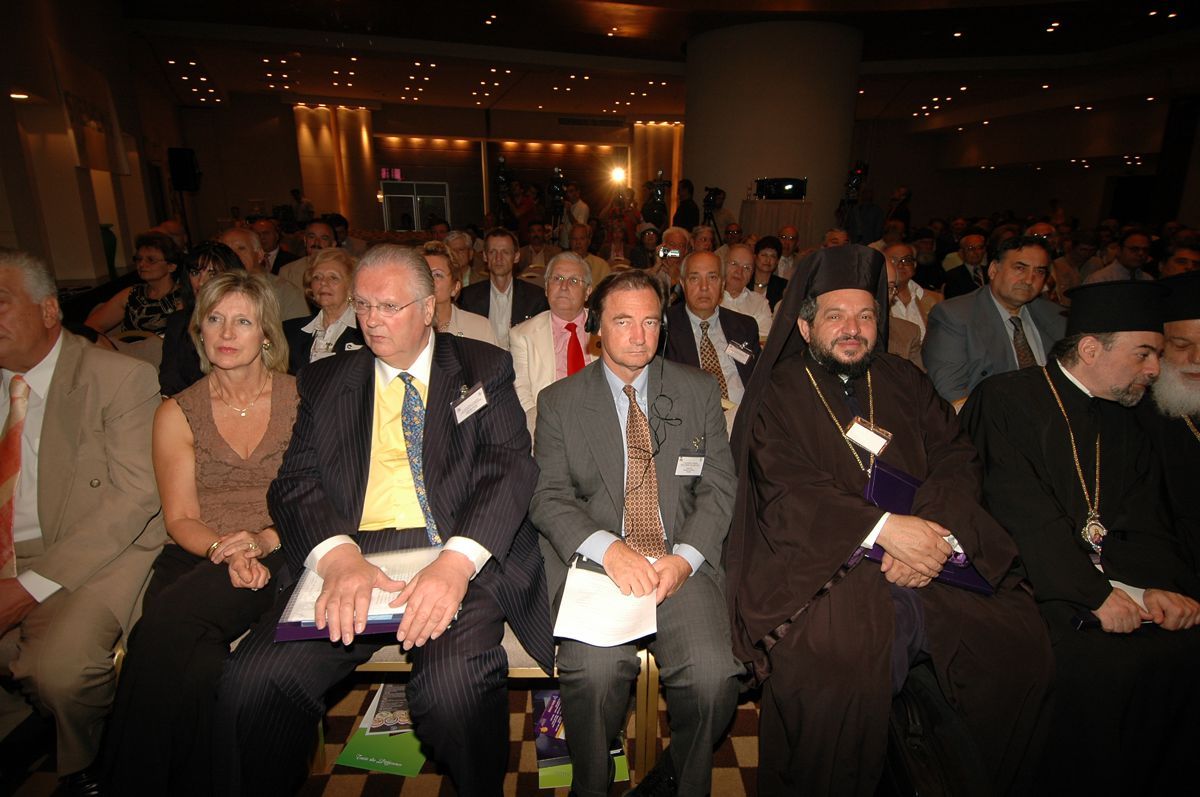 (From left to right) Mrs. Pinelopi Tami (wife of Mr. A. Tamis, Director of the National Centre for Hellenic Studies and Research – EKEME and Professor at La Trobe University) with Mr. Michael Osborne, who announced the establishment of the Greek Studies at the University of Beijing and was honored with the “Golden Crown” of “Ecumenical Hellenism”, Mr. Paul Tigh, Ambassador of Australia to Greece and one of the Conference speakers, the Metropolitan and Bishop Seraphim of Johannesburg and Pretoria and the Bishop Tarasius of Buenos Aires and Latin America, who presented the situation of the Greeks in Africa and Latin America

It was carried out in collaboration with the Hellenic Center for Hellenic Studies and Research (CEMME) of the Latrob University, Melbourne. Representatives of Hellenism from all over the world participated. It was presented by journalists Samou Chrysa and Natasa Ragiou.

350 people of the Hellenic Homogeneity participated.

Under the auspices of the:

With the blessings of the:

With the support of the:

The work of the WORLDWIDE CONFERENCE OF DISPERSED GREEKS, which took place in Athens on the 6th, 7th, 8th June 2006, was completed with great success by the “Ecumenical Hellenism” Program and the National Center for Greek Studies and Research (EKEME) of the La Trobe University Of Melbourne.

More than 500 personalities from the scientific, political, religious and business world took part in the conference.

Forty-two (42) speakers presented the situation of Dispersed Hellenism throughout the world and great conclusions were drawn on the situation of the Homogeneity. Business thinking, social ethos, ecclesiastical spirit, scientific and political mentality were the topics that were developed thoroughly by leading dispersed entrepreneurs, by Metropolitans,  Academics, everyday people and politicians.

The subject of the conference was the study, analysis and promotion of the Dispersed Hellenism through its institutions, as well as its intellectual, academic, economic, cultural and social activities.
During the course of the conference, four thematic pillars were identified:

· The cultural end  of the dispersed Hellenism through an educational, ethno-linguistic and cultural approach.

· The social end of the dispersed Hellenism.

Summarized Conclusions of the Conference

THE CULTURAL END OF DISPERSED HELLENISM FROM AND EDUCATIONAL, ETHNOLOGICAL AND CULTURAL APPROACH

The Rector of the University of La Trobe in Melbourne, Professor Michael John Osborne, referred to the penetration of Greek studies in China, believing that Greek culture is a global and dynamic phenomenon that is inherent in all sciences and arts and belongs to the world. The two “mothers” of the East and West cultures (China and Greece) meet in Beijing and Athens and must co-operate through the study of their cultures.

The sociologist, Professor Efrosini Gavaki provided useful demographics about Hellenism in Canada and gave the size and degree of organization and networking that exists there and referred to the limitations and problems that do occur.

The MP and former Minister, Eleni Bakopanou, showed spread out through her personal and family experiences the hopeful message of maintaining ethnic and cultural identity in the Greek communities of Canada and, as a result, in the Homogeneity generally.

Professor George Leontsinis referred to the educational benefit in the Dispersion as a cultural phenomenon that concerns both the birthplace and the Homogeneity, following as axes the educational mobility and the beneficial initiatives of the Greeks at home and abroad to strengthen the institution of education.

Professor of Philosophy Athanasia Glykofrydi, through a historical review and a philosophical approach, analyzed the concept of ethnic and cultural identity in the Dispersion.

Professor George Kanarakis spoke crudely about the role of the Greek-speaking press in Australia, his contribution to specific social and ethnic linguistic fields, outlining the constraints and identifying his problems and perspectives.

The researcher, Io Angouri, referred to the usefulness and efficiency of the Greek language in the modern professional environment.

Professor Anastasios Tamis developed the problems of political divergence of Hellenism, the lack of syncretism, the malfunctioning of the institutions and the painful for the cultural and social progress of Hellenism ecclesiastic-social conflicts of the recent past.

Researcher Vassiliki Chrysanthopoulou gave an anthropological aspect to Dispersion, analyzed the typology of ethnic organizations, the ties of the Greeks of Australia with the country of exit in modern times, focusing on the cultural identity of Australian Kastelorizers.

Educator Anastasia Kristallidou referred to SAHETI College, a model institution for the Greek language, as well as its achievements, visions and perspectives in the modern world.

Natalia Nikolaou, teacher, made an extensive reference to Hellenism and Greek education in today’s Russia. In particular, she referred to the Greek-language education and the official policy of the former Soviet Union on the preservation of the ethno-linguistic identity of the Greeks and the attitude of Greece towards these issues.

THE SOCIAL END OF DISPERSED HELLENISM

The second thematic axis mainly concerned society and emerged through:

(B) Private entrepreneurship and

Ioannis Retsas, spokesman of the Hellenic Center for Investment (ELKE), stressed the role and importance of Greek investment by analyzing the incentives and subsidy areas.

Australia’s Ambassador to Greece Paul Tigh referred to Australia’s trade goals and relations with Greece, highlighting the trade constraints and problems they pose. He also referred to the prospect of economic and trade relations between the two countries.

Professor Stella Kostopoulou referred to the effects of internal and external migration as well as regional economic diversification.

Mr. Stavros Petrou referred to the problems of the cooperation between entrepreneurs and academics and the constraints and problems that may arise with the emergence of the second generation.

The Minister of Energy and Resources of Australia, Theofanis Theofanous, outlined the vital elements of Hellenism in Australia, gave the mark of his economic potential and referred extensively to the possibility of cooperation of the Greek political world with the Dispersed Hellenism through representative structures.

The involvement of business representatives was essential and constructive

Businesswoman Polyxeni Mazari presented new revolutionary waste management methods applied by her company, contributing not only to the Australian economy but also to the environment.

The presentation of the engineer Nicholas Mitropoulos was particularly important, referring to the new form of energy, biofuels, while stressing their economic and environmental benefits for Australia.

C) HISTORICAL AND SOCIAL REPORT OF THE EPIRUS HELLENISM

Ted Spyropoulos referred to the achievements and problems of Hellenism in the United States in terms of cultural, economic, social and educational strategy.

the report of Archbishop Tarasios on the problems of forgotten Latin American Hellenism as well as on the intra-communal conflicts in a vast geographically problematic province, was amazing.

The speech and interventions that the Metropolitan of Ioannoupolis and Pretoria Serafim held throughout the conference were special. With his great experience of similar conferences and events, he was one of the key pillars of the conference’s success.

The Ecclesiastical work of the Dispersion

The problems and achievements related to the existence of the Greek Orthodox Church in the Homogeneity since 1890, were reported from a total of five speakers.

Professor Christos Vantzos made a brief analysis of the historical course of Christianity and the people who prepared it.

Professor Athanasios Glaros referred to the Cypriot Homogeneity by depicting a rough picture of the presence of intercontinental Hellenism with useful remarks while Professor Manolis Karageorgoudis referred to the relations of the Dispersed Hellenism and analyzed the ecclesiastical problems of the Hellenism from abroad and how they influenced the wider social status quo.

Professor Athanasios Agelopoulos referred to the universality of the Greek spirit and set the parameters for the analysis of the ecclesiastical dimension of Dispersed Hellenism. He spoke thoroughly about the Orthodox spirituality in Europe and the new dimension it takes with the European perspective of Greek Orthodoxy.

THE POLITICAL END OF THE DISPERSION

Professor Nikolaos Tatsis, through his personal research and work and with the help of a bibliographic infrastructure, referred to ideological contradictions and community conflicts while he spoke about acceptance and rejection as well as the integration of economic prospects through globalized technology.

Interventions were made by the priest Georgios Chitakis, who referred to the population decline, the unemployment and drugs as the main problems of Hellenism, the President of the Ocley Community, Leonidas Tsogas, who referred to the progressive and established course of his community, Nayia Georgiou who analyzed the value that the correct pronunciation of the language has and the teacher Panayiotis Liveriades, who spoke about the need to establish a community book library in the municipal and state libraries of Greece and the ones in countries with dispersed Greeks.

With a special splendor and with the presence of 500 people from the Homogeneity and Greece, the main event of the conference took place. In a specially designed auditorium for the needs of the participants and with the presence of the representative of the Prime Minister Konstantinos Karamanlis, the Deputy Minister of Sports Mr. Giorgos Orfanos, the delegates of Homogeneity were honored with the “Golden Crown” of “Ecumenical Hellenism”.

Fifty (50) personalities of the Homogeneity were honored for the first time by their motherland for their great contribution to the preservation of the ethnic identity of the Greek dispersion. The emotions were pervasive throughout the ceremony, which was accompanied by the well-known music composer Giorgos Niarchos, soprano Mara Thrasivoulidou and their collaborators.

The event was covered by journalists Natasha Ragiou and Chrysa Samou, from the DIASPORA program of channel ET3.
Regional events

During the attendants’ stay in Athens, a series of events took place in their honor. This allowed our expatriates to take a separate approach towards the hosts.

The Mayor of Athens, Mr. Bechrakis Theodoros welcomed the delegates by hosting a reception on the terrace of the City in their honor. It was a welcoming, as this event took place on June 5, the day before the opening of the conference.

The Archbishop of Athens and All Greece, Mr. Christodoulos, met the delegates at St. Varvara. A special evening with great emotions as the Archbishop spoke with all the homogeneity and greeted them by giving everyone a memento of this meeting. It was the evening of Tuesday June 6th, the first day of the conference.

Deputy Foreign Minister Mr. Kassimis Theodoros hosted a reception to the delegates in the ceremony hall of the Ministry of Foreign Affairs. It was the farewell ceremony shortly before the homogeneity traveled to Constantinople.

Ecumenical Patriarch Bartholomew received the delegates at the Phanar, and was informed about the conclusions of the conference. A reception was given in honor of the Ecumenical Patriarch Bartholomew, while our expatriates had the opportunity to worship in the Hagia Sophia, in the historic Monastery of Blacherna and in the Monastery of Balukli, where the graves of the Patriarchs are.

Greetings for the conference were sent from:

A number of authorized journalists participated in the missions, conferences and events of the “Foundation of Ecumenical Hellenism” Program. We thank everyone, as well as the cameramen, for their particular effort to record and project us.