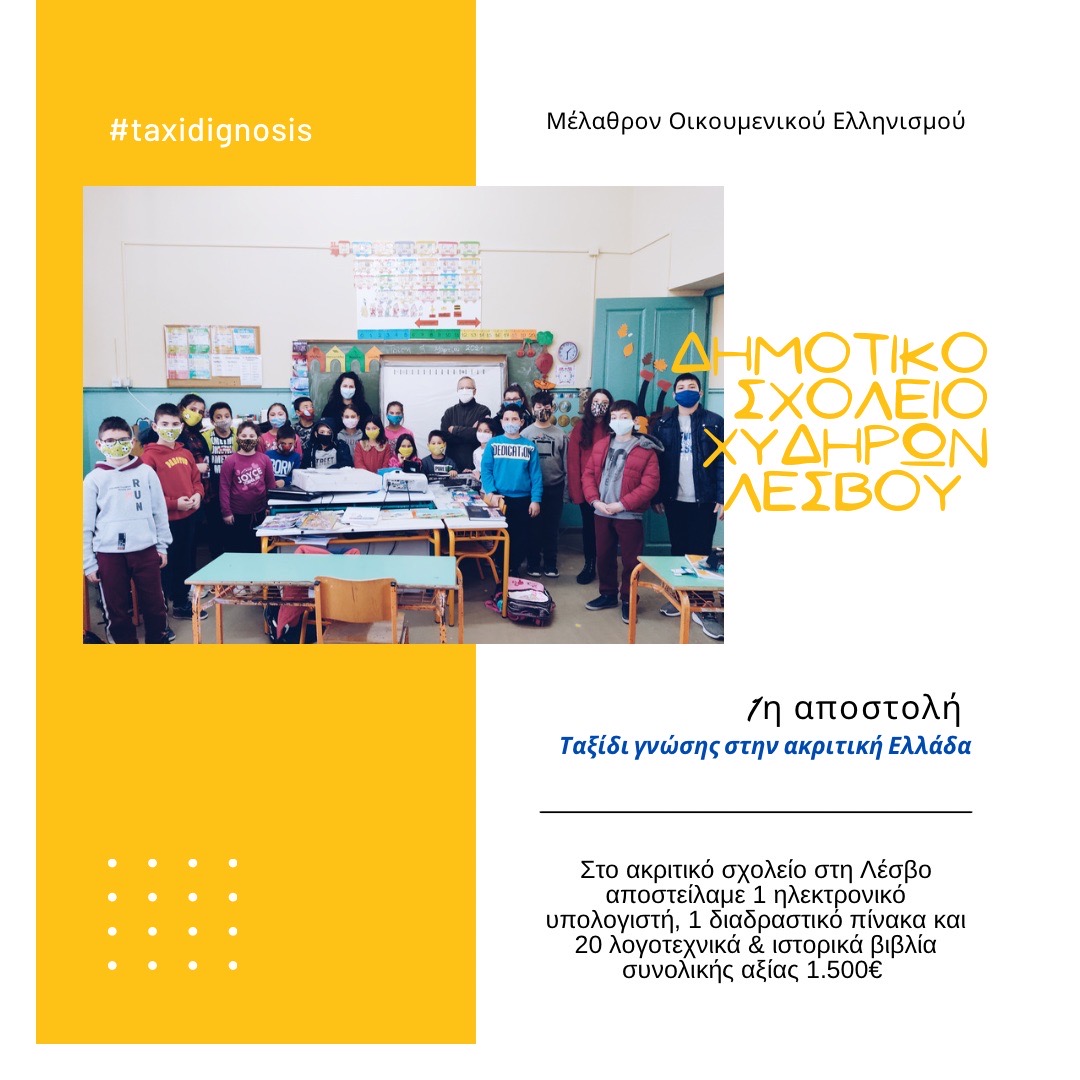 We are pleased to announce that the first shipment of educational material (technological equipment and books) has been concluded!

The recipient of our first mission is the two-class Elementary School of Chidira in Lesvos.

A Few Words about Chidira, Lesvos

Chidira is located in the northwest part of Lesvos, built on a 350 m. altitude and at a distance of 75 km from Mytilene. According to the 2001 census, the population numbered 484 residents, while to this day they reach around 300. The residents are mostly occupied in agriculture and livestock breeding. The village’s name comes from the verb cheo (to pour) + ydor (water), literally meaning “running waters”. It lives up to its name, as every visitor can witness, with clear waters running from rivers and streams.

Historically, in 1462, the Ottomans conquered Chidira along with the rest of the island. Even though it was liberated in 1912, Chidira remained for many years just a mountainous, secluded village without road access and contact with the rest of the island. Toward the end of the 20th century, thanks to the perseverance and creative thinking of its people, Chidira managed to become a part of modern life.

Chidira is the birthplace of the Greek painter Georgios Jakobides who was born there in 1853 and thrived internationally. In 1898 he was commissioned as the first curator of the National Gallery of Greece, in 1910 he was appointed Director of the Athens School of Fine Arts and in 1926 he was elected, according to merit, member of the Academy of Athens. He died in Athens in 1932 at the age of 79.

A few words about the Elementary School of Chidira

The two-class Elementary School of Chidira, Lesvos, where the Nursery School of the village is also housed, received the form it has to this day in the 1930s. It is said that, in the same position, existed housings which were used as schools as early as the 19th century. It has always had two classrooms, except for the 2008-2012 period during which it operated as a three-class school only to go back to its old form, due to the economic crisis as well as other political decisions. This day it operates as a two-class, full-day school with two specialties. The volume of the work, both educational and administrational, is huge and a persistent and diligent effort is put by the staff in order for them to cope. Apart from the headmaster, Mr. Pavlos Angelis, the school is mostly staffed by young, substitute teachers.

The Ecumenical Hellenic Foundation has completed the first shipment to the faraway school of Lesvos, thanks to the financial support you all offered by buying the desk calendar of 2021. Namely, the shipment included:

The total value of the material sent amounts to 1,500 euros.

This is how we, at the Ecumenical Hellenism Foundation, envision Greece of the 21st century, 200 years after the Greek War of Independence. Along with all of you, we give a boost to knowledge, we support new generations in order to constitute valuable citizens for our country’s future, and we set the example of effective solidarity and social sensitivity for the prosperity of our homeland.

We express our gratitude to you for the support for our activity and we invite you to move forward to the expansion of it to all the outermost schools of Greece.