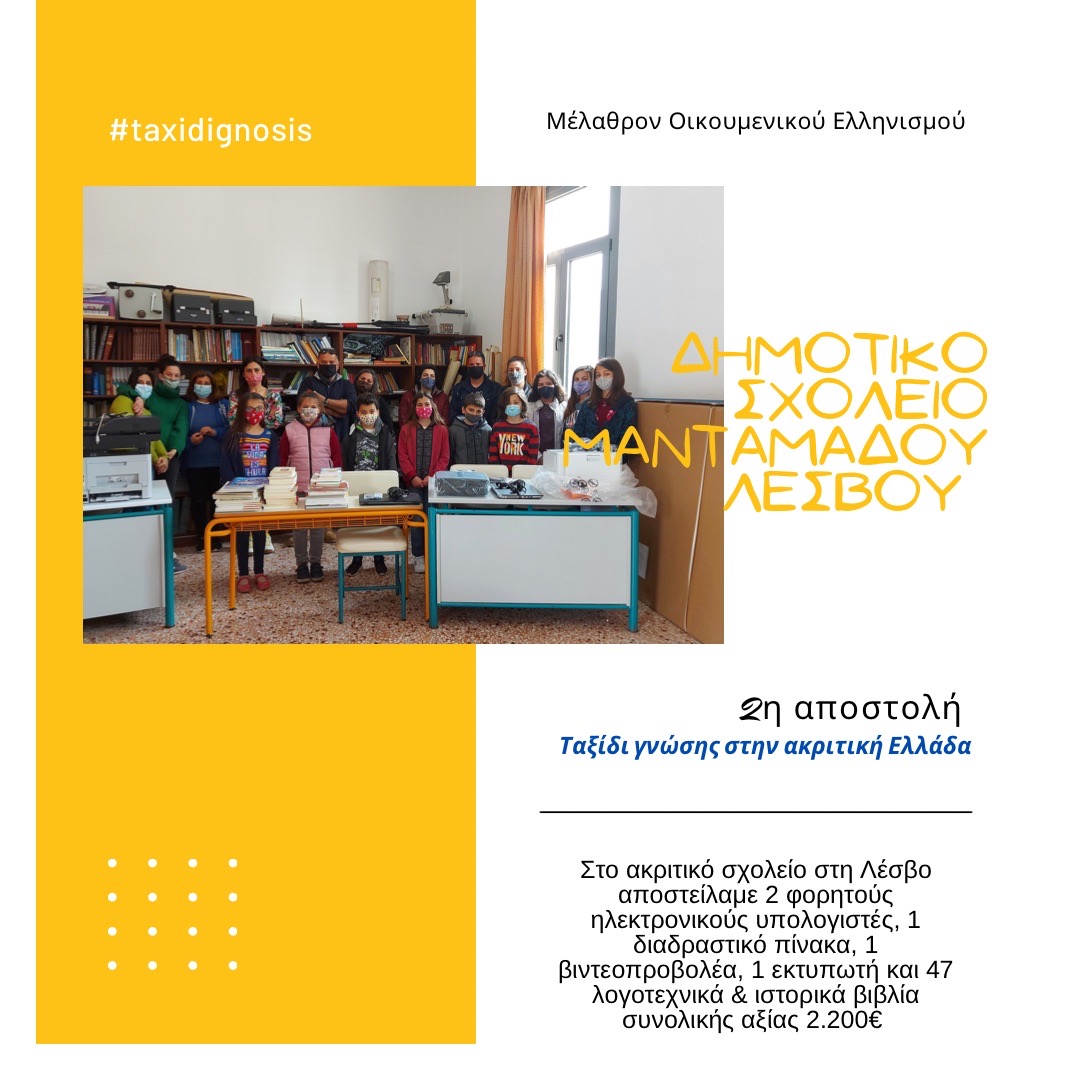 The Journey of Knowledge in the Outermost Regions of Greece continues its course!

The recipient of our second shipment is the Elementary School of Mantamados in Lesvos.

A Few Words about Mantamados, Lesvos

Mantamados is located at a 37 km distance from Mytilene and on an 150 m. altitude, in the northeast part of Lesvos. The village is built inside a significant ground recess and hence it is not visible from afar. This particular quality is not only due to its position which was elected to protect the village from invaders, but also because the color of the entire village coordinates with its environs, as the stones of the houses were extracted from the surrounding mountains. The residents are occupied with olive tree cultivation, but mostly with livestock breeding. The name of the village derives from the Turkish word “mantas”, meaning ox, and referring to the extensive breeding of oxen. It is unknown when was the village transferred to this particular location, but evidence suggests that this supposedly happen around the 18th century, in an attempt by the residents to take shelter against the pirates that were ravaging the location “Palios” (Old), which is said was the previous settlement of the village.

Its location across from the coasts of Asia Minor affected its population composition- especially following the Asia Minor Catastrophe of 1922 and the population exchange- as well as its economic and intellectual growth. In the financial sector, pottery, one of the most important occupations of the residents until the first half of the previous century, constituted a trade channel with the Turkish coasts. Moreover, the planting in the lands of Lesvos of the Adramytini variety of olive trees in the 19th century (a variety that was transferred from the Adramyti settlement, in Asia Minor) led to an extended cultivation of olive trees which still characterizes the area to this day.

Nowadays, Mantamados counts approximately a thousand permanent residents and it belongs as a communal entity to the enlarged Municipality of West Lesvos. The majority of the residents are occupied with livestock breeding and olive trees cultivation. Mantamados is known for dairy and meat production of very good quality. Other occupations in the village are small-proportions craftsmanship and family-owned trade businesses. A large number of traditional occupations has been eliminated today, like the farrier, the tinner, the plowman, the shoemaker, as well as that of the potter which is now considered a traditional occupation.

Mantamados is linked directly to the sacred pilgrimage of the Archangel Michael the Taxiarch’s full-body bas-relief which according to tradition was carved by mud and the blood of monks slaughtered by Hagarene or Saracen pirates. Only one of them survived who hid in the roof of a sacred church and he was the one who carved the bas-relief we have today, sitting on a rock. The church of the saint is located not far from the village. The initial one was built before 1700 and in 1879 it was rebuilt from the ground up. These days, crowds of people from all over Greece make the pilgrimage, since the Taxiarch is known for a great number of miracles. On Sunday of the Myrrhbearers, two weeks after the Resurrection of the Christ, the saint is celebrated along with crowds of people from all over the world.

The contribution of Mantamados to the intellectual life and culture of Lesvos is also significant. In fact, the critic and historian Yorgos Valettas, from Argeno, Lesvos, named Mantamados “intellectual Metropolis” of Lesvos and apart from its intellectuality, it is also distinguished for its revolutionary character and progressiveness.

A school was founded in the village, in 1817, where prominent scholas taught the classes. Among others, Stavrakis Anagnostou, who, in 1850, published the book “Lesvias”, a basic read to get acquainted with the island of Lesvos; Spyros Anagnostou, folklorist and linguist; the novelist Stratis Myrivilis, and others. Many acknowledged people come from Mantamados; the journalist Odysseus Ealemos; the academic Michalakis Stefanidis and his brother, Vassileios, professor at the University of Athens; Stratis Paraskevaedes, archaeologist and theatrical director; the Mayor of Mytiline, Apostolos Apostolou, physics teacher, as well as many others.

A few words about the Elementary School of Mantamados

The Elementary School of Mantamados is located at the entrance of the village. The building with its current form was founded in October 1962, sponsored by the brothers Gerontelis, and it was completed in August 1969. The school was a five-class establishment for a series of years and this year it operated as a six-class.

In 2019, with a sponsorship by Gerontelis Foundation and in collaboration with the PT Association of the Elementary and Nursery School of Mantamados, the school was renovated, while a room of multiple uses was added, for events and activities of the school.

The Ecumenical Hellenic Foundation with the financial support you all offered, as well as with the aid of the companies Intrasoft and Vitex, implemented the second shipment to the faraway school of Lesvos. Specifically, it sent:

The total value of the material sent amounts to 2,200 euros.