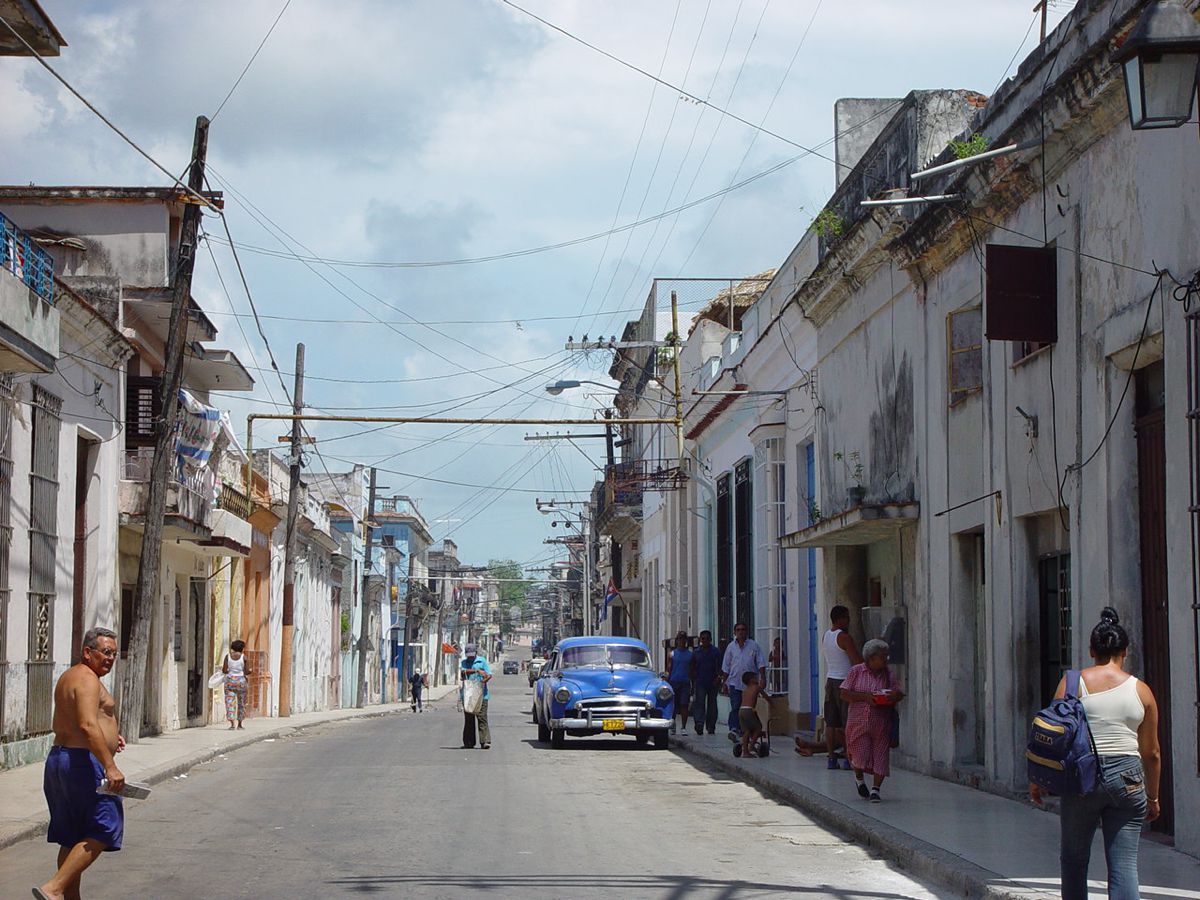 The Archbishop of Panama and the United States of America, Mr. Athinagoras, the Mayor of Havana Mr. Leal, and the Minister of Religious Affairs and Relations with Greece Mr. Calida, welcomed us, representing President Fidel Castro. We now know what love for Greece and ancient Greek culture means.

For eight days we lived in a country, where one surprise succeeded the other, one experience was coming after the other, one sensation was prevailing over another.

“Help!!! We need your help. We suffer. Of course, if anything happens, I am obliged to deny everything and call you liars. That 10 year old girl you see in front of you, if she doesn’t get any help, if you don’t support her, at 13-14 years of age, she will have to become a prostitute in order to survive.” A “cry” from a Cuban mother.

We were astounded by what we saw.

At the University of Cuba, where Mr. Isidoro Gomez Santos and Dr. Rogelio Rodriguez Coronel welcomed us, we saw what we haven’t seen in any other University anywhere else in the world. A huge hall with copies of sculptures from Ancient Greece and the Parthenon, in order for the students to learn the Greek history and civilization.

At the Havana Museum, Mrs. Morain Clavijo Colon guided us through the area, where Ancient Greek statues and vessels in perfect condition prevailed at the most central part of the museum.

We, the leaders of the mission, Mr. Panousopoulos Stavros, President of the “Ecumenical Hellenism” Program, Mr. Agelopoulos Athanasios, Professor at the Aristotle University of Thessaloniki and scientific supervisor of the Program and Mr. Petros Mantouvalos, Member of the Greek Parliament, visited the Mayor of Havana, Mr. Leal. We were accompanied by three personalities of the Orthodox Church of immense significance, His Holiness the Metropolitan of Panama and Central America Athinagoras, the Archimandrite Timotheos and Father Athanasios.

It was one of those experiences that are never forgotten. At the City Hall, the Mayor welcomed us in the warmest way an official has ever done and after offering “his” chair to the Metropolitan he took a stool, one of those we use here in Greece in order to sit by the fireplace, and sat beside him. He started to talk, with knowledge, respect, love for Greece, the Greek civilization and Orthodoxy. We were amazed, for we couldn’t imagine that the heart of the communist regime has such feelings for us.

And it wasn’t the only example. The Minister of Religion and Affairs with Greece, Mrs. Calida, welcomed us, at the building of the party’s Central Administration,  in the area where Fidel Castro works and the members of the University we met at the Institute of Religion of the University and our “guide”, Mr. Isidoro Gomez Santos, ambassador of Cuba made us feel awkwardly wanted and at the same time very proud due to their knowledge and love for the Greek civilization.

We were told that the great visionary leader Fidel Castro has offered to Orthodoxy, everything an ideologist leader could offer and more than any other contemporary leader has ever done. Apart from the holy temple of Aghios Nikolaos, which in 1983 was consecrated by the Ecumenical Patriarch Bartholomew, he offered a huge building of 3,000 sqm, in order to house the School of Theology. That offer of his, which shows the greatness of that leader, is the greatest of offers towards Orthodoxy and Hellenism, because of that school, local priests will spring, those who will staff the abandoned church of Latin America. For it is one thing to send priests to Latin America from Greece for a couple of years and a completely different thing to educate young priests, locals, from Cuba, Panama, Bolivia, Argentina, to serve their congregations and their “country” , as we heard the priests from Bolivia and Cuba calling Greece.

Three kilos of rise, two kilos of beans, half a kilo of sugar, ¼ coffee, soap for two people for a month and in addition, milk and meat for the children until the age of 7. This is what the state provides them with. Everybody has a job but with the 250 Cuban pesos they earn they can only buy meat twice a month, while they need six months of salaries in order to buy a t-shirt and a pair of trousers.  Of course, it would be great if they didn’t need medicines, because the very low local production doesn’t cover the special pharmaceutical needs.

The roads are full of people who wait for some vehicle to come and take them to their destination and the waiting hours are endless for a distance of 10klms. They might be waiting 4 and 5 hours.

The Denis typhoon, the biggest typhoon that has ever passed from Cuba the last 200 years, made us live a remarkable experience. The preparation for it started the day before. At our hotel they started to seal the doors and the windows with big wooden boards. The shop owners were emptying their shops of their merchandise. The villages were abandoned in an exemplary way. Fidel Castro, from the T.V all day, was personally directing the operation for the protection against the typhoon, and when it all finished, he went from corner to corner, in order to give courage to those stricken and to see in person the problems that the typhoon had caused. It is remarkable, that even thought the typhoon literally wiped out entire villages, there were only 8 casualties and those were people who refused to leave their houses.

The biggest problems aroused after the typhoon. The state was paralyzed, the hotel employees couldn’t reach the area, in order to serve us and the food was reduced, due to water and electricity cut off for three days.

We visited the Holy Temple of Aghios Nikolaos. At the entrance, on the right hand side, a mosaic prevailed with the photograph of the Ecumenical Patriarch Bartholomew and Fidel Castro. Here another surprise awaited us, the simplicity of the priests and the “permission” the Metropolitan of Panama gave for the Holy Communion even for the “unprepared”. We all received the Holy Communion.

The Ambassador of Greece, Mr. Avgerinos, a very gentle person, who contributed the most for the realization of the mission, hosted a reception in honor of the mission, after the Mass.

Six children of Cuban families wanted to be christened and become Orthodox. For us, this was a special moment, for it was the first time in the 10 years of our program that with a plastic tub we became godfathers to those six Cuban children and gave them Greek names: Stavroula, Dimitris, Vasilis, Panayiotis and national ones such as: Hellas, Macedon etc. We left a part of our soul to those children and through them we will watch the development of Cuba’s modern history.

Education in Cuba is at a very high level. All children receive literary free education, private tutors for the special aptitudes of every child, while the percentage of the youths that study to become doctors, is the highest in comparison to any other country.

Since 1992, when the Soviet Union stopped sending help, the situation in Cuba is tragic. The American embargo doesn’t allow any ship to approach the biggest island of the Caribbean. Everything in people’s houses is old, rusty, torn and broken. But in their hearts they have love, goodness and their love for Greece. Maybe the Church’s missionary work will help for the resurrection of their souls as well as for the reduction of prostitution, since all women, in order to sustain themselves, were in the tourist’s disposal.

The TV plays only Cuban channels. Every day, on one of them, Fidel Castro gives courage to his people for endless hours. The satellite programs are watched only by the tourists in the hotels, for tourism in the only way to contact the rest of the civilized world.