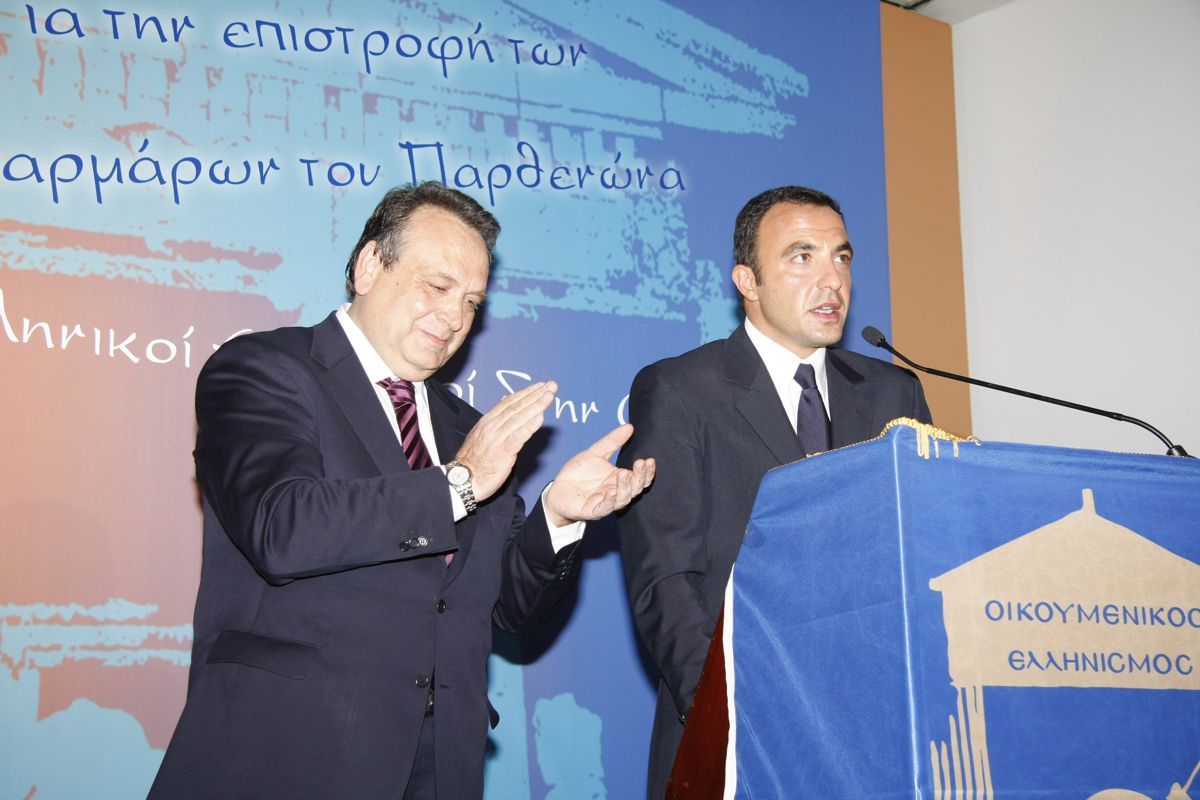 In the photo, the President applauds Nikos Aliagas for his inspiring, patriotic, supportive speech

Official presentation of the publication ‘’Greek Treasures around the World’’.

Five hundred celebrities attended the event organized by the “Program of Ecumenical Hellenism” in Athinais on Monday, March 31st. In the crowded hall, after all the attendees “traveled” all over the planet with the projection of the Program’s missions to the centers of Hellenism, then the Program’s President, Stavros Panousopoulos, announced the continuation of the program for the next decade.
The international historical information on the return of the Parthenon Marbles is one of the program’s objectives. For this purpose, 3,000 volumes of the project “Hellenic Treasures around the World” translated into nine languages, of which three are Chinese, Arabic and Russian, was distributed free of charge to the centers of power of the whole world. Mrs. Xeni Arapogianni, Director of the Ephorate of Prehistoric and Classical Antiquities of Kalamata and former Director of the Museum of Ancient Olympia, author of the project, made the presentation with especially flattering comments.
The Mayor of Athens Mr. Nikitas Kaklamanis, the representative of the Prime Minister Mr. Kassimis, the representative of the Archbishop of Athens and All Greece, Mr. Ieronymos Bishop of Diavlia, Mr. Damaskinos, the representatives of PASOK Niotis Grigoris, SYRIZA Trigazis Panos, LAOS Georgiadis Adonis, The President of the Democratic Republic Papathemelis Stelios, the Deputy Minister of Rural Development Kiltidis Kostas, the MP of Messinia Mr. Lampropoulos Ioannis were only some of those who honored the event and expressed their support for this effort .
Messages were sent by the President of the Parliament Mr. Sioufas, the Minister of Foreign Affairs, Mrs. Dora Bakoyanni, the Minister of Economy and Finance Mr. Alogoskoufis, the Minister of Tourism Mr. Spiliotopoulos, the Minister of Justice Mr. Chatzigakis, the Minister of Transport and Communications, Mr. Chatzidakis, the Minister of Macedonia and Thrace, Mr. Tzimas, the Minister of Development Mr. Folias, the Deputy Minister of Domestic affairs Mr. Zois.
At the event, Nikos Chatzinikolaou and Lakis Lazopoulos were honored, while Nikos Aliagas as a Dispersed Greek who attended and received the “Golden Crown” of “Ecumenical Hellenism” gave a very touching speech to the crowd attending. The event was presented by Grigoris Valtinos and Anna Andrianou, while the Athens Philharmonic welcomed the guests.
The evening’s epilogue was particularly touching as it consisted of a television tribute to the two great Orthodox and Gnostic Archbishops Iakovos and Christodoulos, while the Professor of the Aristotle University, Athanasios Agelopoulos, made a special mention of them. More than forty representatives of the press and all the Greek television channels covered the event while ANT1 SATELLITE broadcasted it all over the world.
Honored during the event with the “Golden Crown” of “Ecumenical Hellenism”: the Mayor of Athens, Mr. Nikitas Kaklamanis and the Honorary President of New Democracy, Mr. Konstantinos Mitsotakis. Also, KLEOS SA, BERGMANN CORD and Emporiki Bank of Greece SA.
Representatives of the Local Government: Mr. Kalogeropoulos Dimitrios from the Municipality of Egaleo, the Mayor of Ano Liosia Mr. Pappous Christos, from the Municipality of Arcadia Mr. Konstantopoulos Dimitrios and the Mayor of Peristeri Mr. Pachatouridis Andreas.