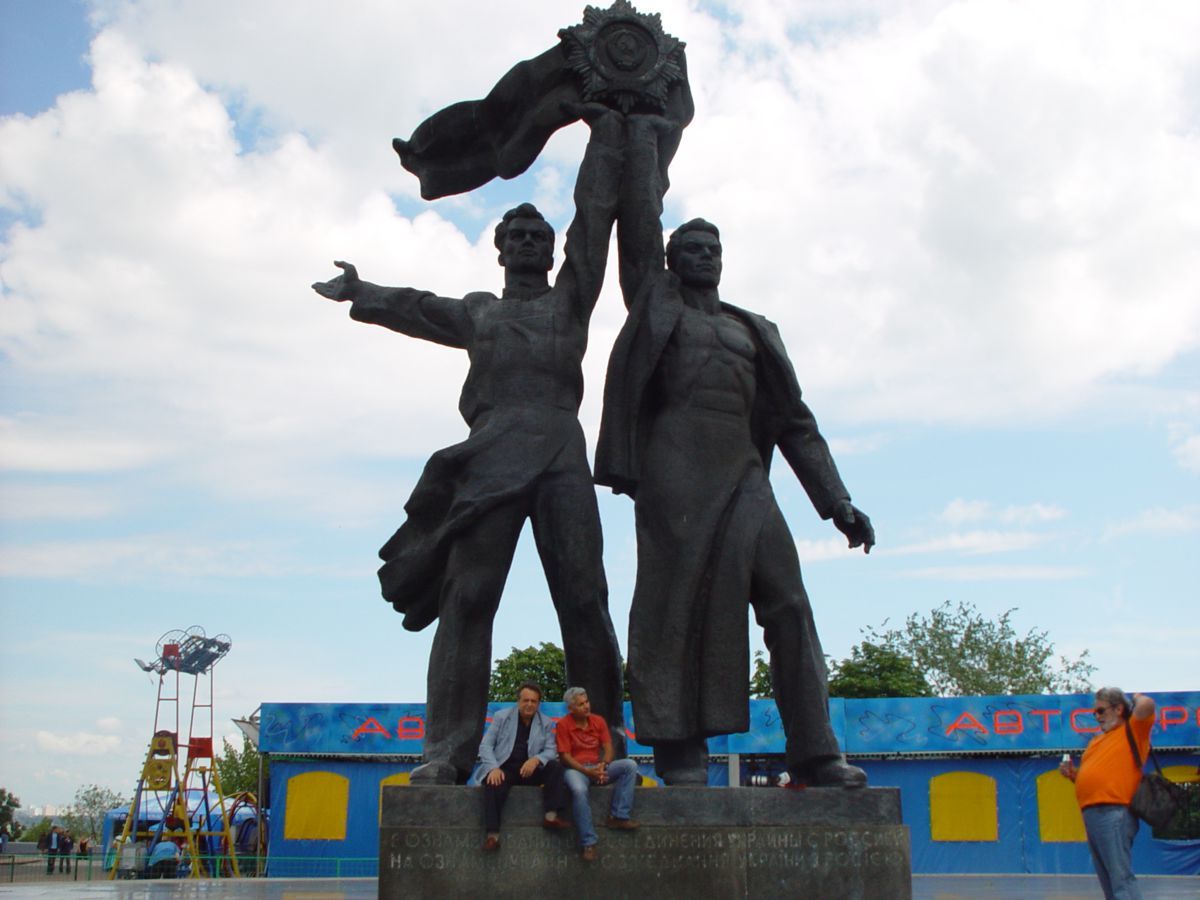 The Statue of the Twinning of Ukraine and Russia

Mission to the Black Sea Countries

We traveled 10,000 km by road to visit the abandoned Hellenism of these areas.
Here, there was once and there is still another Greece.
40 of our members participated.

Forty people, ready for the most difficult and tedious mission, began the journey to the Black Sea regions, where Hellenism thrived for hundreds of years. Bucharest, a city with a population of 3,000,000 was the meeting point for travelers from Athens and Thessaloniki to begin the most difficult mission of the “Foundation of Ecumenical Hellenism “program.

It was considered difficult because the areas we visited have neither tourism infrastructure nor a perception or culture of tourism and we experienced this throughout our tour, by crossing 10,000 kilometers on a destroyed road  – where we needed at least 10 hours to travel 500 kilometers – with few stops where we could get the basic replenishments, while gas stations had one common bathroom for men and women which most times did not even have water!

On the road from Chisinau to Odessa, to Crimea and half way to Kiev, the farmers stopped their work and looked at us as oddities. Wherever we stopped they asked us who we were and what we were looking for in these areas, because no bus had passed by for the past 20 years. It is worth noting that knowing all these difficulties, the Program rented a luxury bus from Greece in order to carry out the mission.

In all the cities we visited, all the places we passed through, we heard and saw something Greek. We all had the feeling that Greece used to be here!

The first contact with this “other Greece” was for the travelers from Thessaloniki, when passing over the borders of Bulgaria with Romania, over the bridge of the Danube, where they saw many small ports used for commerce during the years of the Turkish Occupation. The management of these ports was assigned by Russia to Great Greek benefactor, Syggros.

We needed 14 hours to cross 630 kilometers from Budapest after passing Moldova and the small independent state of Pridenstrovie, we ended up late at night in Odessa, the centre of Hellenism in the 18th century and one of the most beautiful and best preserved cities of Europe, with great architecture and colors. A special city, with happy people taking their strolls down the city’s roads on impressive horses, while the coffee shops offer their customers blankets to wrap around themselves in the biting cold. We visited the National Museum with the famous Golden Hall, where findings from the ancient Greek cities of Southern Ukraine are on exhibition. The port! This is where the revolution of 1917 began, when the first revolt against the Czar took place in 1904 by the sailors of the Potemkin battleship.

No matter where we went, everything was Greek. The most touching moment of our mission was the pilgrimage to the house of the Filiki Eteria (Friendly Society). It was the property of the Maraslis Family, and it was offered and used as a hideout by the founders of the Filiki Eteria: Ksanthos, Skoufas, Tsakalov and Anagnostopoulos. Our eyes were filled with tears and we were overwhelmed, when the Patriarch of Alexandria and All Africa, Theodoros II, read out the oath of its members.

We met Greeks in an old neighborhood! A dirty yard, surrounded by poor houses and clothes hanging on the clotheslines, filled with the love of the Greeks of Odessa who greeted the mission of the “Ecumenical Hellenism” Program.

Greek children, dressed in traditional costumes, offered fruit and treats, all simple, but genuinely Greek. We offered books, flags and our love! It was an emotional meeting. Elisavet Polychronidi, President of the Community, and her sister Aglaia, confessed to us that when they left, the “cries of desperation” and protests lingered in their hearts, how the Greek State does not treat them as Greeks, and does not even issue Visas so they can visit the land of their ancestors.

The new Consular of Greece, Mr. Manolis Papadogiorgakis was kind enough to visit us in the hotel we were staying. He appeared like a person interested in Hellenism. Let us hope that his presence here will help Hellenism and put a stop to the blackmail towards Greeks, that forces them to pay 100-150 euros, which equals a month’s pay in Odessa, in order to be able to issue a Visa for Greece.

We left Odessa and headed for the Crimean peninsula. Ancient Greeks called this the peninsula of Taurus. There is a strong presence of the Greek population. All the cities have a prominent Greek element. Simferopol, Sevastopol, etc.

On our way to Yalta, our next stop, we stopped at Olbia (which means “happy”). It was founded by Greeks of Miletus in 650 B.C. This was the richest and most important colony of Greeks and the capital of Greek colonies.

Yalta. The word is Greek and it means “seaside”. This was the vacation resort of the former Soviet Union. In the area of Livadi, 3 kilometers from Yalta, inside the house of the Greek Demvegiotis, the Conference of the three Great Powers took place in 1945. Specifically Roosevelt from the USA, Churchill from England and Stalin from Russia met in the “Argonaut Conference” and reached world altering decisions. According to these, World War II ended earlier and the creation of the United Nations was decided.Our guided tour of the beautiful Yalta ended with our visit to the houses where Maxim Gorky and Anton Chekhov lived.

We also visited the Greek community in Simferopol. The community’s building was being reconstructed, so the Greeks of the region greeted us on the pavement outside the community. They could not believe we had made it all the way there, since we were the first mission from Greece that ever visited them. The President of the Community Vasilis Symvoulidis opened his heart to us. The same problems, the same complaints as in Odessa.

Returning to Yalta we passed through Balaclava, a large region of Sevastopol. This is where Odysseus met the man-eaters Laestrygonians. This is where the shipyards and hideout of the Russian submarines, 150 meters under the surface, were located, where only 5 people had access. This is the region where Gorbachev spent the crucial hours of the political change of the Soviet Union.

Sevastopol, a city with 340,000 inhabitants, was built on the location of the ancient Greek city Kherson.

We took the road to Kiev. The distance from Yalta was 1000 kilometers and it took two days to get to the oldest capital of the Russian state. Impressive architecture reminiscent of St. Petersburg. Temples with golden domes everywhere. The Independence Square, where one can see the classic statue of the Russian Revolution and the Statue of the Twinning of Ukraine and Russia. The Monastery of St. Lavra, with the catacombs and the remains of 130 Saints. We were received by Father Antonios, Father Kyrilos which is the head of the Monastery’s internal affairs and the Vice-Chancellor of the Theological School, Mr. Klimis. The hospitality was cordial and the discussion very productive for the cooperation of the Program with the Monastery.

Here we did not meet the Greeks because their bureau was absent in Greece. However, we visited the Consulate. The Consul, Mr. Emmanouil Papadogiorgakis, having a workload, as he said, welcomed the mission without spending much time. How could he find time, with 350,000 Greeks living in Ukraine. We thanked him and delivered our spiritual work. We also went to worship  the temple of St. Andreas.

Leaving Kiev, the next destination was Chisinau, the capital of Moldavia. Here, the great Greek Michalis Katsikas, Captain of the Russian Army, builds his home and offers it to the members of the Filiki Eteria for their struggle. The cemetery also shows that once here everything was Greek. Here are the family graves of Mavrokordatos and the Katakouzinos. 30 km outside of Chisinaou there is the villa of the Ralli family, which came from the Phanar. Today it is called Pushkin Museum. The meeting with the Greeks was painful. Here, President Vladimir Yanev doesn’t speak Greek, but calls himself Greek. Our whole conversation took place with a translator. No comments.

The last station of the mission is Braila, Romania, built on the Danube Delta. Beautiful city with a strong Greek element. In the Orthodox Church the President welcomed us and we gathered to hear the exact same things. Problems, the same concerns in the poor but neat community

We started heading back. Our emotions were indescribable, as yours will be when reading about this journey.