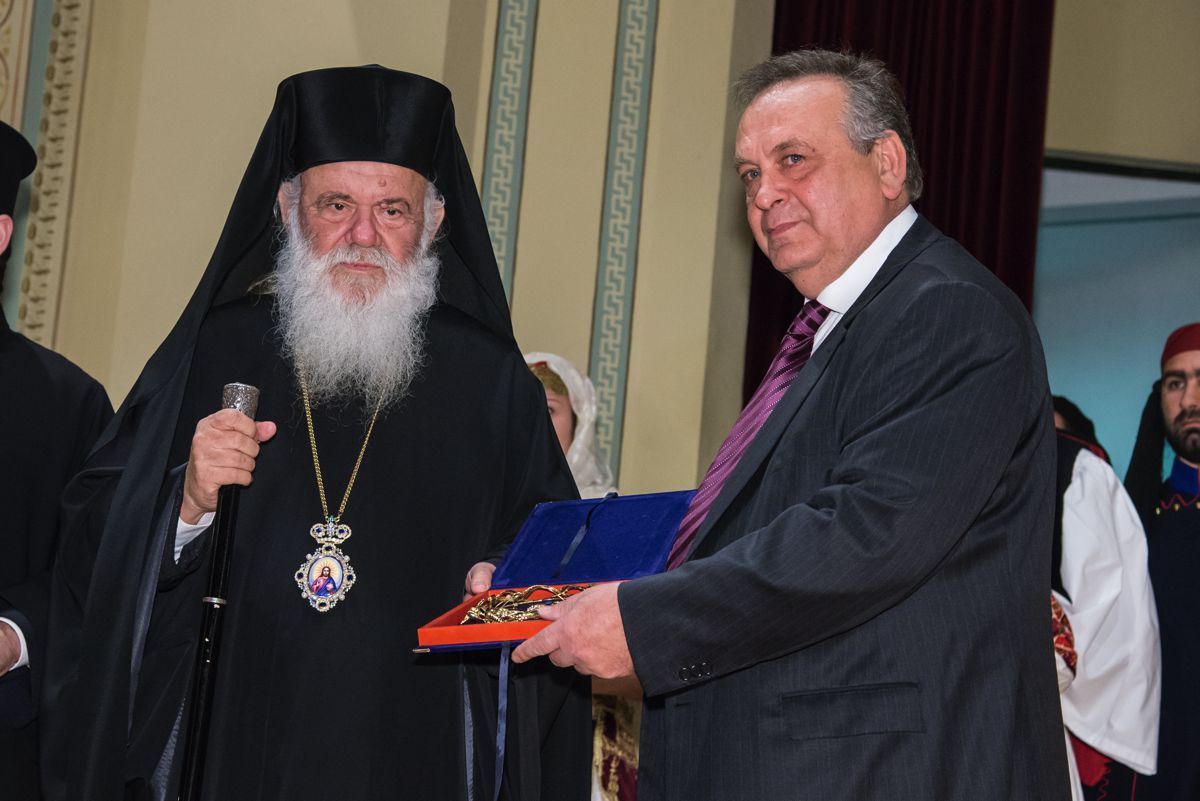 In the presence of the Archbishop of Athens and all Greece Mr. Ieronimos, a toll was carried out for the 20 years of our action and the beginning of our ten year program recording the Migration of Hellenism was announced.

“Values ​​are not bought. They need struggle, blood and effort, “stressed the Archbishop of Athens and All Greece, Mr. Ieronymos, at the event for the 20 years of the Foundation of Ecumenical Hellenism.

The event took place on February the 8th 2016, at the Parnassus Philological Association, which was packed by friends of the Foundation. Academics, Clergy, athletes and people with general worries. Deputy Minister on Foreign Affairs for Hellenes Abroad, Mr. Giannis Amanatidis, attended.

The event started with traditional dances and the event’s presenter was Professor Athanasios Agelopoulos, scientific supervisor of the Program. Afterwards, audiovisual material with the title “Traveling, wherever there is Hellenism” was presented.

The Archbishop was honored with the “Golden Crown” of Ecumenical Hellenism by the Program’s President Stavros Panousopoulos, who referred to the ten-year program of the record-census of Greek Hellenism that is our national capital.

The Archbishop in his speech stressed that “Hellenism outside Greece is a great subject that we usually pass”. He mentioned about the previous projection that “admittedly this trip we saw was impressive and substantial. The messages that one can take from what has been heard are many. “The Archbishop especially mentioned  a school in Africa that the mission visited, the Shaheti-Golem School , saying “we saw hundreds of children holding the images of the rebellion. I thought, said the Archbishop, that if we made a visit today to any school and show the figures of Kolokotronis or Karaiskakis, the children would not understand. Because it is considered deviant for these figures to embellish the walls of our schools and are now thrown into the warehouses. This is something that must cause concern. To ask why there are no values ​​today. We believe that the values ​​can be purchased at the supermarket. Values, however, are not bought. They need struggle, blood, effort. And this is difficult to meet today. ”

Afterwards, the Archbishop, after stressing that such events are an oasis in the present time, awarded honorable distinctions to personalities who support the work of the Foundation of Ecumenical Hellenism.

More specifically, he awarded honors ​​to the following:
• Papakyriakou Marianna, a notary from Serres.
• Stavrakouka Eudokia, a lawyer in Giannitsa.
• Kotsiri Ioanna, physician from Patras.
• Messini Vera, psychologist-President of the Humanities Association for the charity work it offers.
• Folkloric Society of Keratea “Apollo” that impressed and touched the audience with its dancers.