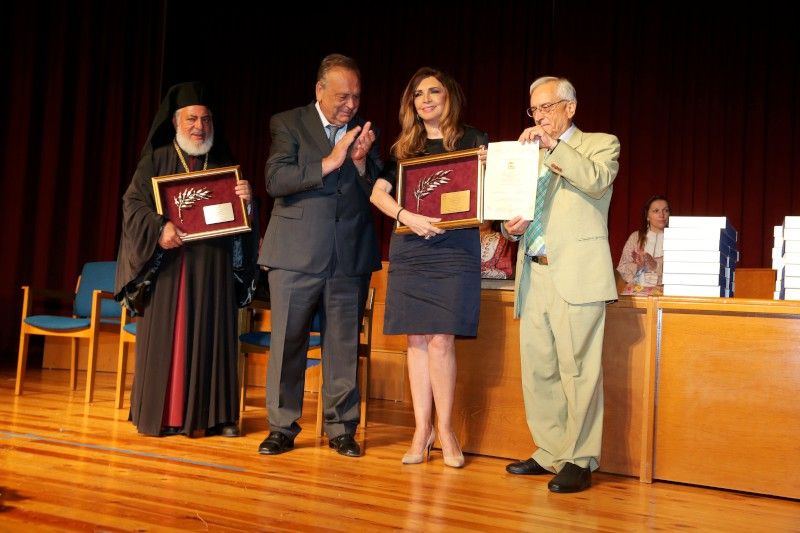 Εvent in the Cultural Center of Kykkos Monastery, Nicosia – Cyprus

In the presence of 400 guests, the event of “Melathron Ecumenical Hellenism” was held in the Cultural Centre of Kykkos Monastery, in Archangelo, Nicosia on Monday the 24th of June. Despite the three-day national mourning for the loss of dearly-departed Christofias and because the event was of national content, a mass of people attended to experience unique moments. Everyone was very emotionally charged after watching the documentary that presented the travelogue of “Ecumenical Hellenism” all over the world, where they witnessed the feats and drama of Hellenism. A Hellenism that is alive, creates, excels, participates in global affairs and one that, in some parts of the world (Latin America, Mexico), abandoned by the mother country, slowly dies but is resisting.

A very special moment was when the well-known artist, Mimi Denisi, and the fighter, the real representative of Cypriot – Greek soul, Georgios Christofidis, were appointed High Commissioners of “Ecumenical Hellenism”. Mimi Denisi, moved, connected in her speech, her artistic work with the actions of “Ecumenical Hellenism” and did not refuse to get photographed with anyone, proving the range of an important personality. Georgios Christofidis, with his speech and his passion, with simple and humane words which included meanings of soul and struggle, received the distinction stressing that “until today, you were the only ones to have honoured me”.

The applause for the maestro Maro Mitsa, the dance performance of PA.SI.DI and piano player Marios Ioannou that kindly accompanied the event was very special.

A big impression and endless flattering words for the journalist of Antenna Nikolas Vafiadis, who travelled exclusively for the presentation of the event.

The University professor and scientific supervisor of Melathron closed the event looking back at the night and among other things he said “we have held numerous events in Greece and all over the world, but what we experienced today in the Martyric Great Island is unique.”

Lastly, the president of “Melathron Ecumenical Hellenism” Stavros Panousopoulos,  who has dedicated his whole life  (36 years) to the recording of the unwritten history of Greece and to the international historical information provision on our national matters, especially charged, stood in the following “on this planet, except for the wild nature, nothing else is moving, that is not Greek” and repeated that “if someone doesn’t experience the Cypriots from up close, they cannot understand what it means to be Greek”. At the end of the event, Maro Mitsa invited him on stage and they performed together “An voulitho”. It was a big surprise that the president reciprocated but at the end everyone, standing, applauded this unique moment they had experienced.

During the event, the benefactors and supporters of Melathron Ecumenical Hellenism were honoured: