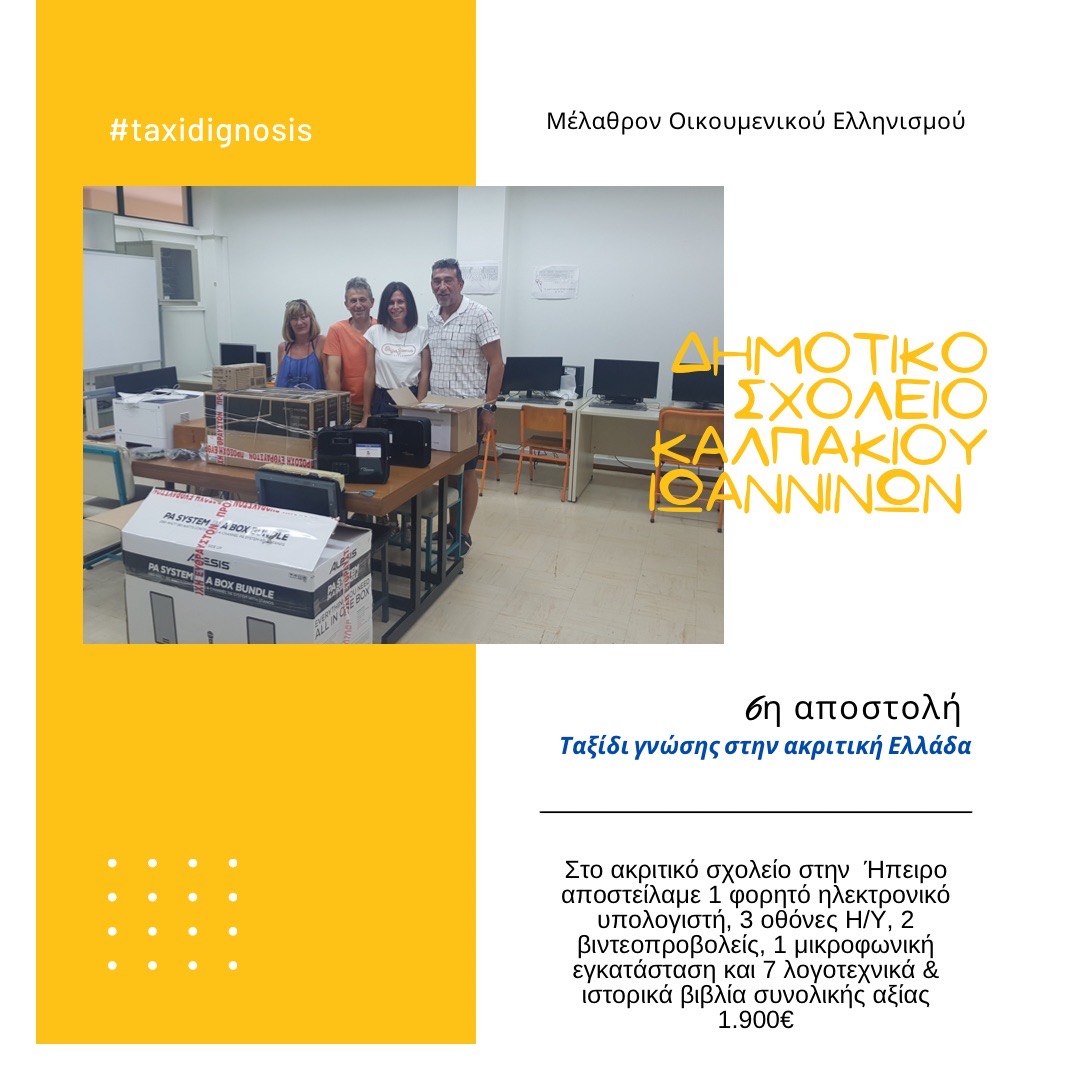 The journey of Knowledge in the Outermost Regions of Greece turns six months of giving to our faraway located schools!

A few words about Kalpaki

Kalpaki is located northwest of the Ioannina Region, on a 430 m. altitude, and a 35 km distance from the city of Ioannina.

It is built on the road axes leading to Konitsa and Albania respectively.

On the west side sprawls the rich plain of Ano Kalamas, whereas on the north side of the village lies the Zagori area, with the renowned Zagorochoria.

The community of Kalpaki was founded in 1972 after the joining of two settlements consisting of the residents of Elafotopos and Kato Pedina.

The Greek-Italian War of 1940 started in Kalpaki, where the Greek troops intercepted the Italian army in terrible battles.

On the hillslope of Prophetes Elias (Prophet Elias), the well-preserved OXI (meaning NO) monument reminds us of that period and the glorious days of 1940. The War Museum, at the entrance of Kalpaki, is visited by thousands of visitors every year. The soldiers who serve as tour guides, answer the inquiries of the visitors about the events of the war. The museum is rich in exhibits, graphics, and acoustic representations of the battle of Kalpaki.

The cave that was used as Headquarters of the Commander of the 8th Unit during the war is located after the moat around the fortress. The entrance of the cave is decorated with the bust of Charalambos Katsimitros, who confined the Italian forces in Kalpaki with his devotion to the protection of the defensive line of Elea-Kalamas. Above the settlement and on Seletouria Hill, looms the gigantic bronze statue of the warrior soldier of 1940, on the Tomb of the Warrior, where is also the military ossuary of soldiers who fell during the war. Every year, on the day of celebration of OXI, orisons take place, an invitation to the dead, whereas, on the other side of the hill, they perform an impressive reenactment of the battle.

At a 3 km distance from the village is the Holy Cloister of Vellas, which was built in the 11th century. There operated the ecclesiastic school and until 1989 there was also a Pedagogic Academy.

Kalpaki nowadays is the seat of the Municipality of Pogonio, which counts 61 communities.

A few words about the Elementary School of Kalpaki, Ioannina

The Elementary School of Kalpaki currently operates as six-class, with all the specialties, as well as an all-day school offering meals to the students participating in the all-day activities.

The building of the school was established in 1997 and consists of the main classrooms a canteen, a multiple-uses room, a computer lab, and a music room.

Next to the school’s premises is a gym where the physical education classes take place, as well as many other events.

For the last five years, the school welcomes refugee children from the organization located in Doliana, a village at a 7 km distance from Kalpaki.

The Ecumenical Hellenism Foundation with the financial assistance offered by its supporters, as well as with the aid of the companies Chimar and M.S. Iakovides Hellas, implemented the sixth shipment to the faraway school of the Ioannina Region. Specifically, it sent:

The total value of the material sent amounts to 1,900 euros.

We express our gratitude to you for the support of our activity and we invite you to move forward with us to the expansion of it to all the outermost schools of Greece.