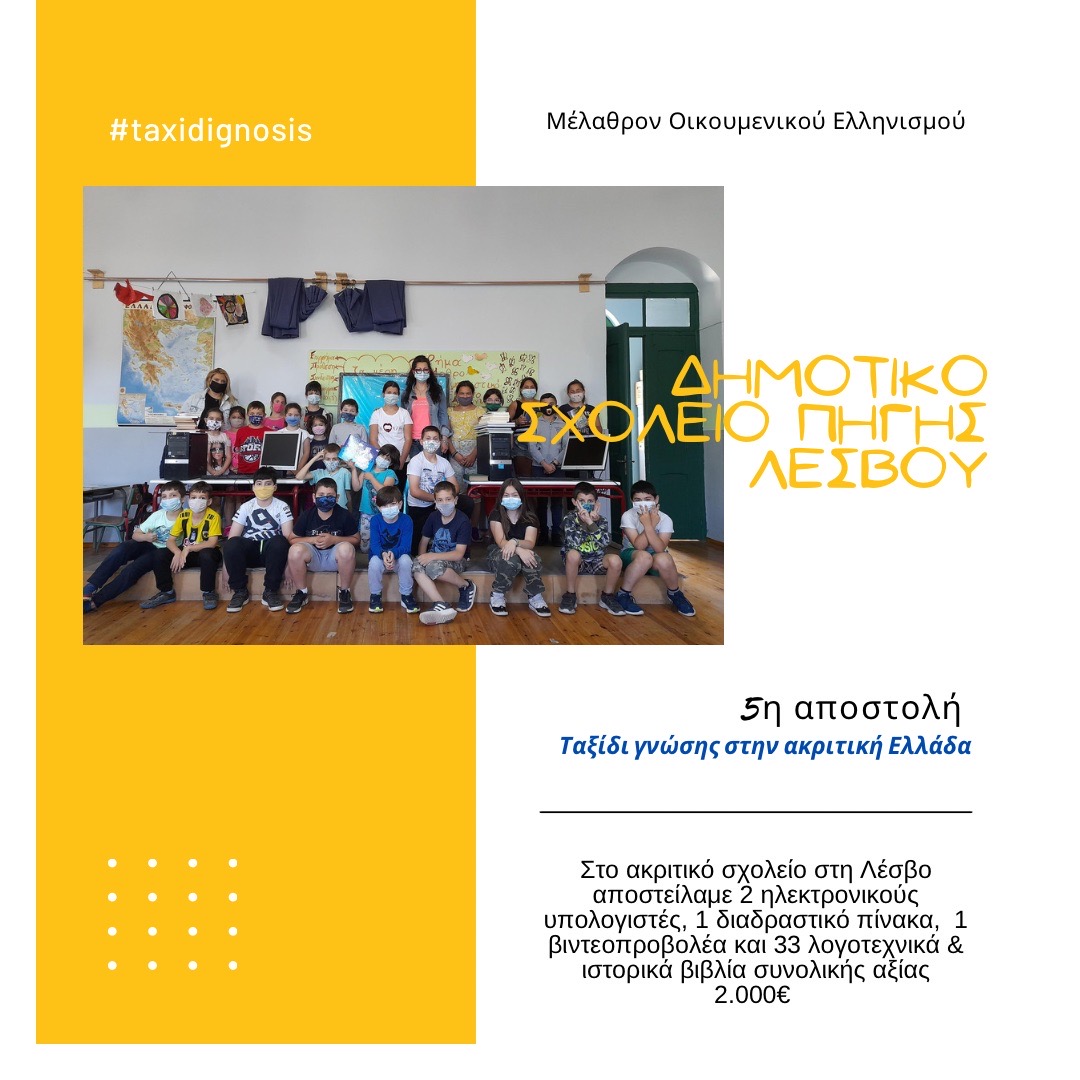 The journey of Knowledge in the Outermost Regions of Greece continues its course!

A few words about Pigi, Lesvos

The community of Pigi is located northwest of Mytilene, at a 20,9 km distance and a 140 m. altitude. The village is surrounded by hills with olive trees, making it unseen.

It is built on the left bank of the “Teneya” stream. The name of the village (Pigi means Spring) derives from the many aquatic springs around the village. In fact, one of them is devoted to Saint Paraskevi Church, the central church of the village. The water of this spring is channeled inside the church and called ayeasma (holy water).

According to tradition and the elders’ narrations, Pigi village was inhabited for the first time around 1780. Back then, Pigi was a farmers’ settlement of 25 residences. The residents arrived from the abandoned village Paleochori, at a 4-5 km distance from the current location of Pigi, and from which nothing has been saved. The residents of the abandoned village were perpetually being robbed by the Turks and the pirates, thus, they chose a safer location in Pigi.

Since the Ottoman Occupation the following tradition has been recorded:

“A monk called “Kalogereli”, when informed that Filiki Eteria (Society of Friends) is organizing a revolution against the Turks, left the monastery he was in, next to Kalloni, and headed to that direction. Along with him, during the same years, another young man, Koutougdis from Pigi, whose first name is unknown, also disappeared. Two years after Koutougdis’ disappearance, the residents of Pigi were informed that in Odessa, in the Russian Empire, young Koutougdis was active among the members of Filiki Eteria,. They sent him a letter then writing among others the following: “Koutougdis, come down, everything is upside down”. Koutougdis returned from the Russian Empire, mixed with others from Filiki Eteria in Lesvos, and acted there for six years. At the age of 35 however, just before the War of Independence, he was arrested by the Turks of Lesvos and hanged on a plane tree, in Nio Chorio village, next to the center of today Mytilene. Before his hanging, he made it known that in Russia he acted with “Kalogereli” monk.

Nowadays, Pigi has approximately 350 residents. Most of them are occupied in the olive tree cultivation industry while some are stock farmers. From the archives, of the school one can deduct that in the previous years there were formidable obstacles for the development and cultivation of the spirit, the most significant of which was the lack of resources.

A few words about the Elementary School of Pigi, Lesvos

It was not possible to determine the year and the Greek Government Official Gazette sheet reporting the foundation of the school, even when consulting the archives of the school. The archives go as back as the year 1929, in spite of the fact that the school existed in Pigi for many decades prior to this date. The building that houses the Elementary School of Pigi was built in 1928. Throughout the years and until today, the school has operated as a two-class and as a three-class.

The Ecumenical Hellenism Foundation with the financial assistance offered by its supporters, as well as with the aid of Savramis company, implemented the fifth shipment to the faraway school of Lesvos. Specifically, it sent:

The total value of the material sent amounts to 2,000 euros.