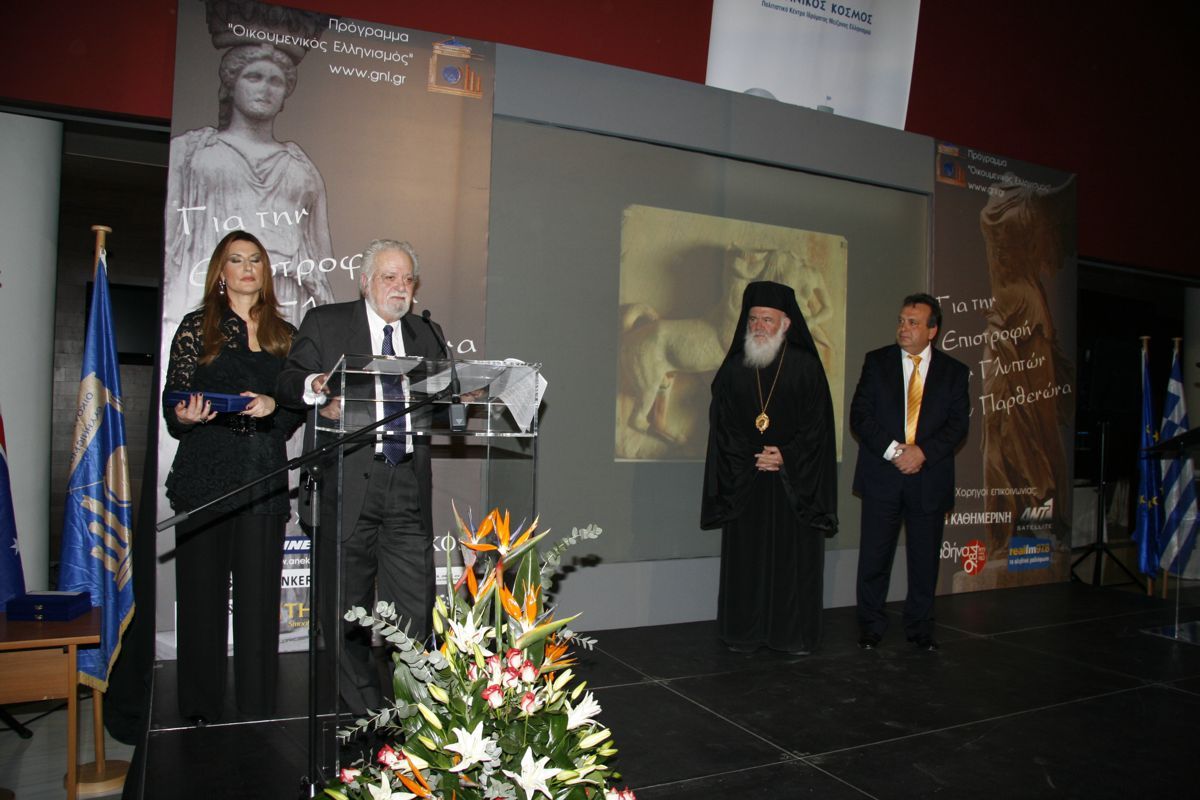 The Archbishop of Athens closely watches his friend Spyros Merkouris, President of the Melina Merkouri Foundation

Foundation of the Hellenic World – Athens

Subject: The beginning of the dispatch of the publication “Greek Treasures around the World” to the foreign centers of power. The Worldwide committee for the return of the Parthenon marbles attended. A vote was announced and the event was presented by the journalist Eirini Nikolakopoulou. Tony Maroudas sang.

The event started with the presentation of the Program’s History and it’s missions to the Centers of Hellenism around the world. Then, the President of the Program Stavros Panousopoulos, announced the first mission to the European Parliament in Brussels on December the 8th 2008, where the “Ecumenical Hellenism” Program will distribute 785 free volumes to the Members of Parliament. Afterwards, honors were given to the World Commission for the Return of the Parthenon Sculptures.

The international historical information on the return of the Parthenon Sculptures is one of the objectives of the Program. For this purpose, 3,000 volumes of the project “Hellenic Treasures of the World” translated into nine languages, of which three are Chinese, Arabic and Russian, will be distributed free of charge to the centers of power all over the world.
The Beatitude Archbishop of Athens and All Greece, Ieronimos, the representative of the Prime Minister, Deputy Minister of Rural Development, Kostas Kiltidis, the representative and member of the Parliament Mrs. Maria Kollia-Tsaroucha, the President of the Democratic Revival Mr. Papathemelis Stelios and the representative of the Mayor of Athens Mr. Vafidiadis Nikolaos were some of those who honored the event.

VOTE “INTERNATIONAL UNION FOR THE RETURN OF THE PARTHENON MARBLES”

The International Union wishes to continue its cooperation with the Greek Government and support its efforts for the return of the Parthenon Sculptures to Greece and congratulates the Government for the successful completion of the wonderful New Acropolis Museum. We also congratulate all those who have worked these recent years for the return of major sculptures of the Parthenon from Italy, the Vatican, Sweden and Germany.

A new PROPOSAL for the return of the Parthenon Sculptures should respect the positions of both sides.
• The issue should be dealt with without prejudices by both sides regarding the title and legal ownership of the Parthenon Sculptures.
• The Sculptures can be returned to Greece by the British Museum as a renewable loan provided that all terms of a cultural agreement are met.
• Greece should be prepared to grant appropriate works of art from Greek Museums in exchange for the sculptures as a mutual loan, so they can be exhibited at the British Museum.

On behalf of the International Union for the Reunification of the Parthenon Sculptures, David Hill

Professor of the Aristotle University of Thessaloniki and Scientific Supervisor of the Program, Athanasios Angelopoulos

The President of the Program “Ecumenical Hellenism”, Stavros Panousopoulos