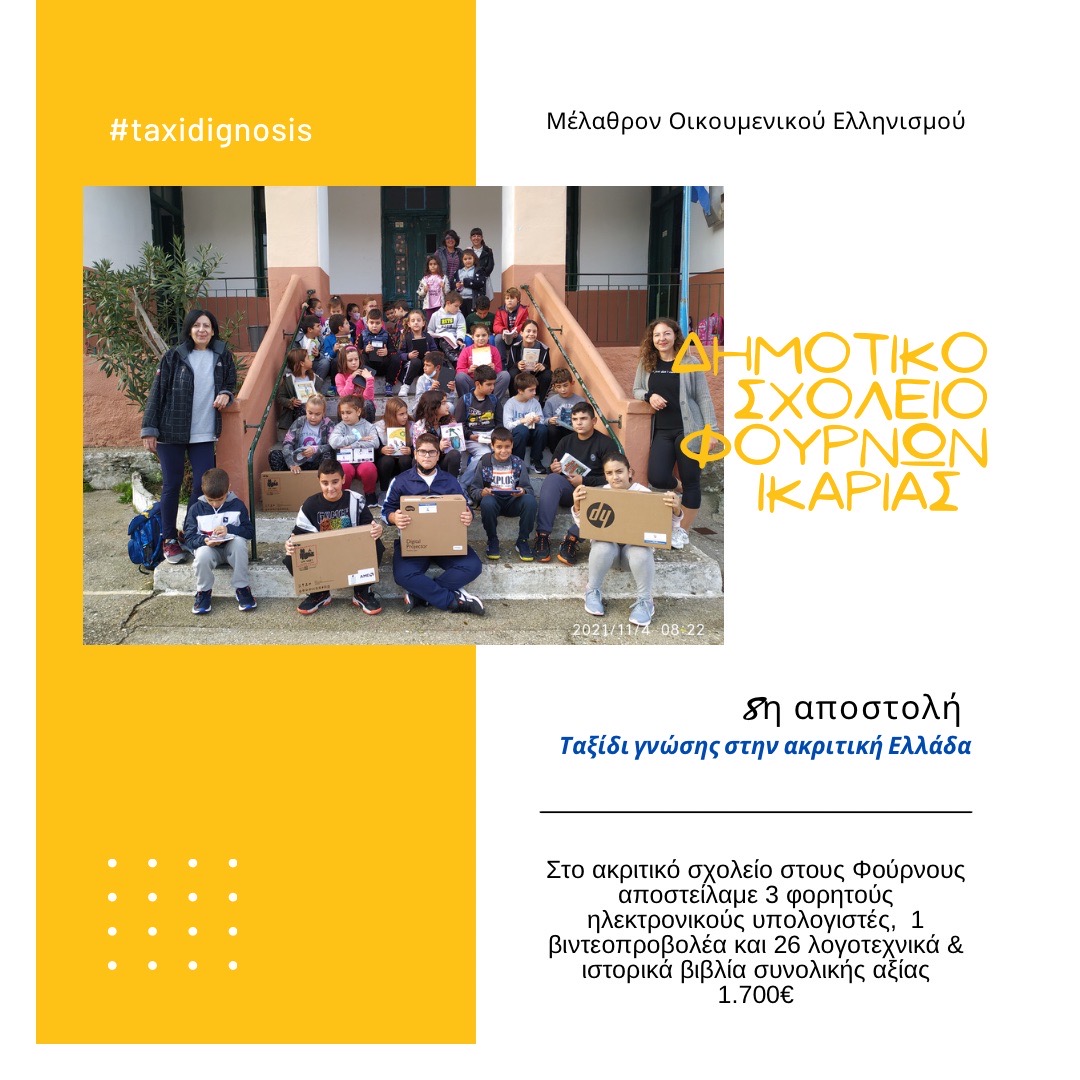 The journey of Knowledge in the Outermost Regions of Greece grows day after day!

A few words about Fournoi, Ikaria, for a sixth-grade student

“We live in a small and beautiful island of the Aegean Sea. This island has been inhabited in the ancient times since there are archaeological findings to prove so as well as the ancient quarry in Petrokopio. In the Byzantine times is was deserted and was a pirates’ base. In its seabed many ancient sea wrecks have been found and we have become popular because of them.

In the summer, the island is crowded with people. We don’t like this because it is very noisy and intense. We prefer the winter even though we are just a few and the school opens. We are better because it is quiet and it is our land. We feel free. We go fishing, we collect calamari, we play around here and there.

The truth is that we don’t study much. We are only three students in my class but we face a lot of difficulties, our teacher says. Our school has only 34 students and operates as a six-class. It has a large cement yard where we sometimes hurt ourselves when we play. We would like it to be covered with a soft material just like the high school’s yard. In the classrooms we have bookcases with a lot of books. Many of them are donations by various organizations. The look after us because, as they say, we are borderers. We were just born here and we love our land. We dream of leaving, studying, and coming back here again”.

A few words about the Elementary School of Fournoi, Ikaria, written by the students of the Fifth Grade

Our school is the Elementary School of Fournoi Korseoi. It is located in the village of Fournoi, close to the municipal hall, 50 meters off the sea.

It consists of two buildings; one is an old construction and it used to house the old elementary school in its three rooms. The new construction has five rooms; one of them is the gym and the other the computer room. Also, the new building houses the teacher’s offices as well. The two buildings have yards which connect with stairs. At the large yard we spend the breaks in between classes and we do the physical education class. It has basket hoops and goalposts. We also have a school garden, which we fill with plants all year.

In our school we have six classes. We attend the fifth grade; its class is in the new building. We like our class, although it is a bit small. Surely we are just a few as well; we are four. We have our teacher -Mr. Vassilis- a gym teacher, and English teacher, and a German teacher. Unfortunately, we don’t have a music teacher, an art teacher, a drama teacher or a computer science teacher.

We like school. It is our occupation, otherwise we wouldn’t have anything to do. We me most of our friends here. We learn almost everything. We don’t like waking up early and sometimes we have a lot of homework.

We love our school, it is our second home”.

The Ecumenical Hellenism Foundation implemented the eighth shipment to the faraway school of Fournoi. Specifically, it sent:

The total value of the material sent amounts to 1,700 euros.

For the purchase of the items sent we specially thank the companies Kosmidis, Efthimiadis, and Mesitidis, as well as the supporters of Ecumenical Hellenism Foundation.